The Player as an Explorer: An Archaeology of Imagined Worlds

Over the past year, I played two video games that were developed twenty years apart and might not bear many similitudes in gameplay elements and story: Outcast (Developer: Appeal, Publisher: Infogrames, originally 1999)1I first played Outcast 1.1, released in 2014 after a crowdfunding campaign, which was an enhanced version of the original game. An official remake, overhauled and with better graphics, was released in 2017. For those who want to play Outcast, I would recommend the 2017 version, as it is better adapted to modern computers and has a better interface. and Outer Wilds (Developer: Mobius Digital, Publisher: Annapurna Interactive, 2019). Yet, in both games the player explores unknown worlds and civilizations and, during their journey, collects information, learns about in-game cultures and accomplishes quests. I have rarely played games that have struck me as much as these two, and I wanted to understand why this was the case. My aim with this blog post, then, is not to write a critical review of two games or to produce an academic analysis of two entertainment products, but to reflect on my role as a player in these games.

As said above, both games might not share many elements, but they have the exploration aspect in common. I will refrain from revealing too much about their stories to avoid any spoilers, but short descriptions are necessary. In Outcast, the US government creates a gate to a parallel world, called Adelpha, and sends a probe. The probe, however, is destroyed. This causes an energy feedback that creates a black hole. The player takes the role of the former US Navy SEAL Cutter Slade, whose mission is to escort three scientists to the parallel dimension to repair the probe and close the black hole (and – of course – save Earth). However, Slade gets separated from the scientists and strands in a small village somewhere in a mountainous region. Surprisingly, he is regarded as some sort of savior – Ulukaï – by the Talan, the bipedal species populating Adelpha. According to the Talan, the Ulukaï would restore balance to the world. The background story might not sound particularly innovative. However, what fascinated me is how I became acquainted with (or rather how the game introduced me to) the completely imagined civilization that the developers created. The world consists of several continents, each with its own particular environment, and the player jumps from one continent to another through gates called daokas (honestly, I had to think of the portals in the TV series Stargate). Every continent has its own culture and economy (fishery, agriculture, mining, commerce), inspired by Asian, European and African societies. Talanzaar, the “world of the city”, is focused on commerce and trade and has a rather oriental setting.

In Outer Wilds, things work differently, as the player does not carry any guns, and, though there is some kind of storyline that slowly unfolds with the exploration of the solar system and the collection of clues, the game begins with no particular background story or specific objective – except for that of exploring the solar system. Indeed, whereas Outcast plays in a parallel world, Outer Wilds is set in an imagined solar system. The protagonist is an astronaut from a planet populated by a bipedal species. Again, I do not want to reveal too much about what the player discovers over the course of the journey. It suffices to say that you are stuck in a time loop before everything resets (except, of course, for the collected clues) and you start on your home planet again. The whole solar system changes dynamically, so a planet might look differently 15 minutes into the time loop than at the beginning. You begin each time loop with slightly more information than the loop before.

One aspect that both games have in common is the presence of (old) civilizations, while creating an environment which motivates us to explore these civilizations and the unknown, as well as uncovering mysteries along the way. In Outcast, the developers imagined a civilization with its own history, belief system and social structure. Through interactions with the Talan, the player learns about their culture and history. It is also a story of environmental destruction: Motazaar, for instance, has become a desolate continent due to the mining operations, important to build weapons for the ruler Fae Rhan’s army. The dialogues with the Talan can also be funny, for example when in a conversation with one of them, Zeo, our main protagonist asks how it would be possible to distinguish between a fake and a real essence stone (to be collected by the player), and Zeo does not understand the question. For him, this question is silly, because the difference is obvious. In fact, it might be for Zeo as a Talan, but not for the player/Slade as an outsider. Furthermore, the Talan have their own language, and the player learns at least some words throughout the game. While writing this blog post, I even discovered a dictionary of Talan language on the internet.

In Outer Wilds, we take the role of an astronaut who prepares for their first flight into space. We start on the home planet Timber Hearth, and must first learn about some of the basic mechanics of space flight. Not unlike Outcast, Outer Wilds has its funny moments. In one of the dialogues, the fact that the launch platform is made of wood is highlighted, which is not very reassuring. Before our first launch, we visit the local observatory/museum, featuring exhibition objects with explanatory texts. We learn about an ancient species called the Nomai who visited the solar system a long time ago and left many traces. During our journey, we explore old dwellings of the Nomai, search through their abandoned houses and look for clues. Their writings are based on a quite interesting system (curving branches) and can be deciphered thanks to our translator device, which we carry with us. The in-game translation of these texts is crucial, as they provide clues about the solar system and the reason the Nomai where there. 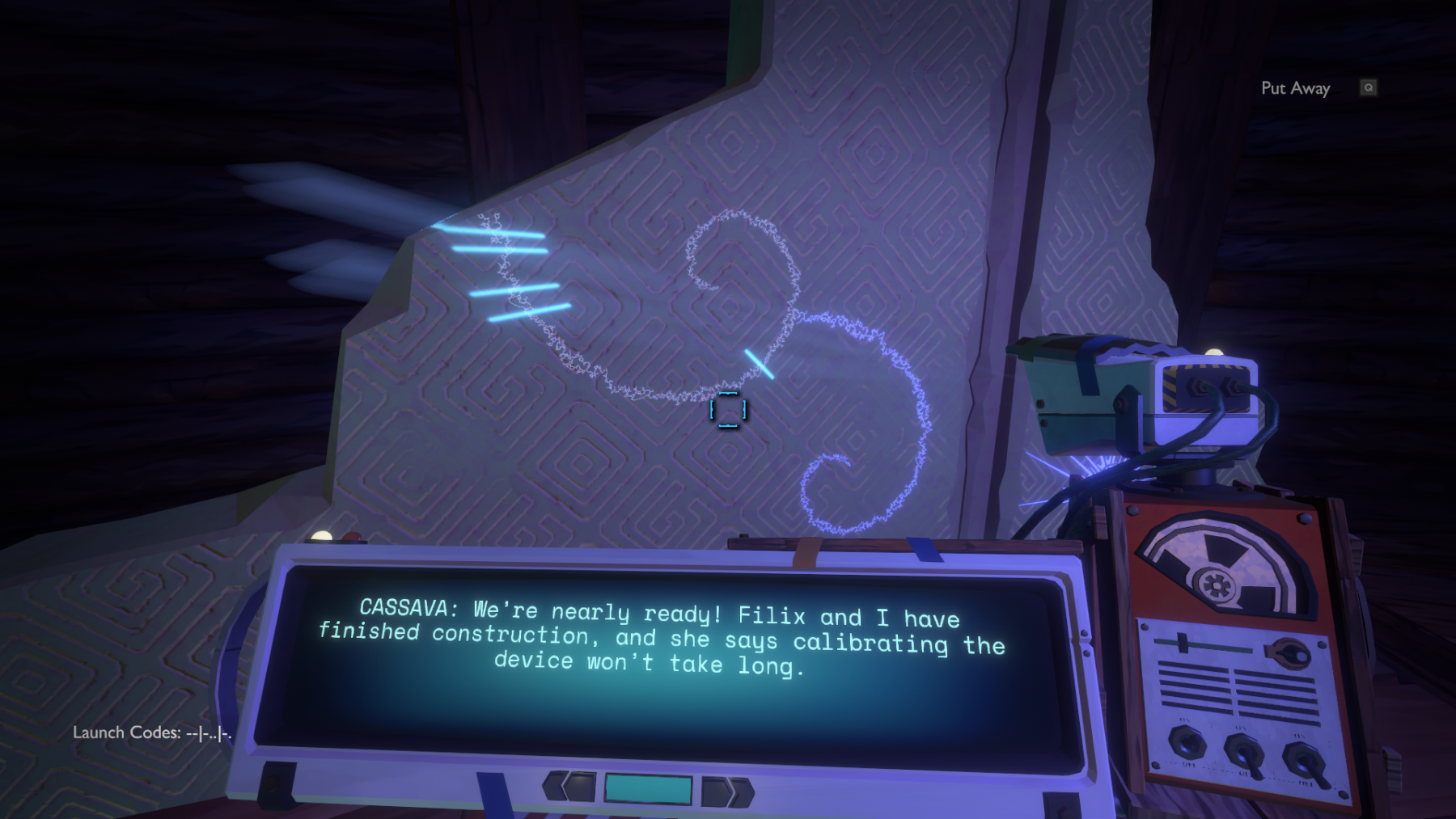 One of the Nomai writings, exhibited in the observatory. The device helps the player to translate them.

The wish to explore other worlds and to learn about (old) civilizations is what drives the player in Outer Wilds and in Outcast, and I think the pages, forums, and discussions related to both games highlight this (There is a website dedicated to the Outcast universe, with sections about the Talan). Whereas in Outcast, we become acquainted with an existing civilization in the world we explore, in Outer Wilds, we learn about an old civilization by following the traces it left behind. However, both games have in common that we look at civilizations from the perspective of an outsider. The Talan are, at first, as unknown to us as are the Nomai. This is what has fascinated me in both games. While playing these games, I became an explorer of digital realms.

To boldly go where no one has gone before

Of course, such games are entertainment products. They do not serve educational purposes, even if some elements of the Talan civilization might be inspired by the “real world”. The Talan working in the riss fields wear conical hats, which conspicuously remind of the Asian rice field workers and their headwear… I guess that in order to identify ourselves with characters in a game, there needs to be a right balance between, on the one hand, the unknown and unfamiliar, and, on the other hand, the known and familiar. We need enough motivation to keep playing and exploring, while not being completely “alienated” by something too difficult to understand or decode.

Yet, even as those games are not meant for educational purposes, isn’t the work of historians and archaeologists (and many other researchers) also motivated by the wish to understand and explore the unknown? One of the achievements to be awarded by playing Outer Wilds (at least on the platform Steam) is actually called “Archaeologist”. It is earned when the player completes the ship log, meaning when they have discovered and explored all the places and read (translated) every Nomai text.

Of course, I do not seek to provide a thorough analysis of these games, and there is always the possibility of a more critical assessment, (while being aware of not over-analyzing things, especially when we do not know the whole development process). Outer Wilds might be more inclusive than Outcast, as the non-human character we play is not gendered. In Outcast, we play a male protagonist and though the Talan are gendered, we only meet males – there is one in-game explanation. At one point, though, we meet a Talan with a female voice, but apparently male. Our protagonist reacts a bit confused at first. Having said this, we should also bear in mind that the games were released twenty years apart, and, in my opinion, the developers of Outcast did an excellent job in their presentation of the Talan.

When I started playing Outcast and Outer Wilds, I did not know what to expect. In the end, I was struck by these imagined worlds to explore and I wanted to understand why. Of course, the prospect of exploration alone does not make a game appealing, much more is needed: identification with the characters, funny and scary moments, challenges… Possibly, my fascination with the exploration of these worlds was also fueled by the real-life lockdown during the pandemic. When it was not possible to travel for real, at least in the games, I felt like going where no one had gone before.

In Brussels for a symposium on media and cultural life in occupied Western Europe. Looking forward to it and pleased to be one of the presenters today!