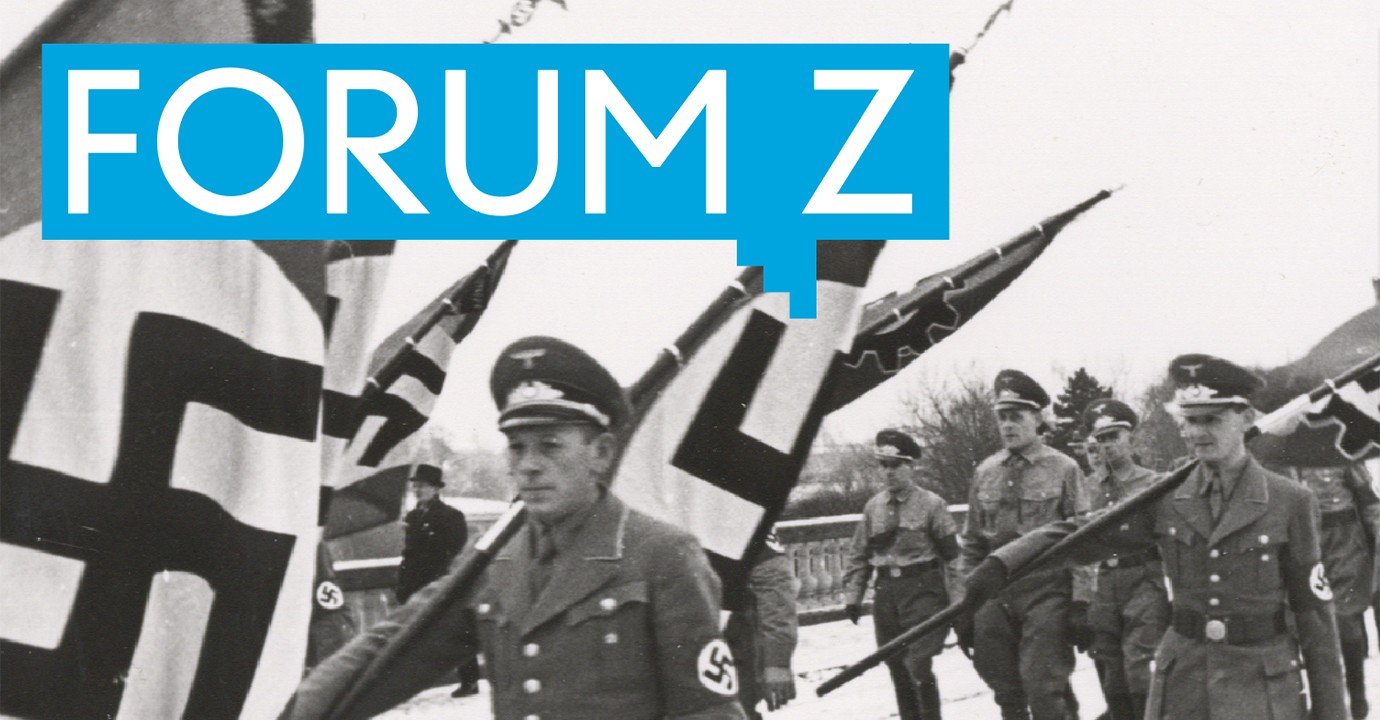 The long shadow of the Second World War: An overview of the debates of the last ForumZ

On 25 March, the Luxembourg Centre for Contemporary and Digital History (C2DH) organised another successful ForumZ, this time on the Second World War and research perspectives in this area. The event took place at the Centre national de l’audiovisuel (CNA) and could be followed via twitter with the hashtags #ForumZLu and #ShadoWW2.

The format chosen for the second ForumZ promoted an interactive exchange between the public and the guest speakers. Following a first part with short presentations of six minutes by ten speakers on their research, the public actively participated in discussions on ten thematic tables, each moderated by a guest speaker, according to her or his area of expertise. The participants were given the opportunity to ask questions, exchange views and discuss the challenges of research on the Second World War. The present article aims to sum up the table debates and presentations, by identifying and addressing three recurrent themes: sources, memories and (historiographic) narratives.

The presentations and discussions illustrated that the research of historians is based on a whole variety of sources, such as diaries, administrative records, interviews, prison books or letters, scattered in numerous archives. Though researchers and archivists contribute to discover and explore new sources previously ignored, many of them remain undiscovered or are even irreversibly lost. Collections of sources might move around from one storage to the next, split up in the process and possibly reunited at a later stage. Such transfers can happen on an international level, for instance in the case of over 3000 files transported from the Service historique de la Défense in Vincennes to the University of Trier, or the NSDAP membership list kept in the National Archives in Washington. Archival institutions are indispensable for discovering new sources, expanding collections and helping researchers by granting them access to these sources. However, they often lack human resources, necessary to inventory archival funds, thus making them accessible for researchers.

Another aspect, linked to the question of accessibility, concerns the data protection, raised by Georges Büchler (Musée national de la Résistance) in his presentation and more thoroughly discussed at one of the tables. In Luxembourg, the legislative framework is only being completed this year and the protection does not always work in a manner that meets the researchers’ needs, thus complicating the situation. On the other side, this issue also entails ethical considerations: How far can a historian go when he is faced with personal data?

The table discussions highlighted the problems of research in history more generally, and WWII more specifically. Archival institutions assist historians in their work and provide them access to files and records. When documents are stored in different archives, it can be challenging for researchers, especially when they adopt transnational perspectives. Furthermore, sources can be biased, and the work of the historian is also the result on an interpretation of the sources, even if it needs to be contextualized, illustrated and based on coherent arguments.

Because of its complexity, its consequences and the innumerable individual and collective fates, the Second World War has been a source of post-war myths and taboos (a recurrent notion in the discussions). In Luxembourg, the questions of collaboration, resistance and forced recruitment are three striking examples in this context. The debates in society on these topics are laden with myths, transmitted to following generations. Identities changed, during and after the war. Myths have been created and uphold, or reinterpreted, for instance within the global framework of victimization. Rumours have persisted for a very long time in post-war society. Silencing and the phenomenon of forgetting have slowed down and hampered the research.

These are many issues faced by research on WWII, but post-war narratives need to be demystified and challenged. Only full disclosure enables to grasp the complexity of the war and related events, to challenge binary oppositions like ‘good’ and ‘bad’ or ‘victim’ and ‘perpetrator’. Concepts, such as ‘resistance’ and ‘collaboration’ need to be analysed in their whole complexity, as it has been highlighted by Henri Wehenkel. Furthermore, memories are not the same everywhere and depend on the context, as research by Eva Klos (University of Luxembourg) on the post-war narratives of forced recruitment (Zwangsrekrutierung) in Luxembourg, East-Belgium and Alsace-Lorraine has shown. Whereas no specific memory exists in Belgium, in France and Luxembourg the enrôlés de force have succeeded in their struggle to become recognized as victims of Nazism. In the latter country, the forced recruitment has (mis)used the Shoah semantically to integrate the concerned soldiers into this group of victims (“déportés militaires”).

Historians working with oral sources and interviewing witnesses and their descendants are even more directly concerned with the challenges of remembrance (Renée Wagener, Fernuniversität Hagen). Witnesses might use narrative strategies to avoid speaking of violent experiences. Taboos persist in following generations; memories are distorted over time, influenced by media and tied to local contexts. Yet despite these issues, remembering the war is important for pedagogical reasons, such as in the Musée national de la Résistance. Younger generations need to be confronted with the past, not simply as a collection of facts, but as a presentation of personal stories and fates, too.

Writing about the past: the many faces of WWII

The presentations by the guest speakers and the debates at the thematic tables have shown that the Second World War can be approached from many different perspectives. In this context, they also highlight that the periods before and after the war have to be taken into account, as in the case of Thomas Grotum’s (Universität Trier) research on the Gestapo archives. Forms of resistance and collaboration have already existed prior to the invasion of Luxembourg, and antisemitism, as Vincent Artuso (C2DH) has shown, is not limited to the years of occupation, but a complex phenomenon in need of deeper analysis of the pre-war as well as the post-war situation. In the post-war period, the occupation has left its traces, as we have already seen with how the war has been remembered. The time after 1945 was affected by cycles of revenge; methods of violence were transmitted from occupation to the post-war period. Besides extending the period of research to gain new insights, geographical limits must also be reconsidered. Collaboration between bureaucracies of different countries already took place before the war, as well as exchanges and informal contacts at the borders.

Moreover, researchers need to focus more on biographical aspects, on the behaviours of individuals and the contexts in which they acted, instead of just considering collective actors. This leads to a more nuanced view of decision-making during the occupation, where historians have to refrain from judging and presenting solutions (Henri Wehenkel). When topics such as resistance and collaboration are tackled, it also entails a confrontation with how to identify them and where it begins. New methods and digital tools, such as visualisations of networks of people helping refugees, can provide different perspectives (Marten Düring, C2DH). They show network centralities, identify previously unknown connections or provide unexpected results and thus force to rethink the source material. At the same time, the researcher has to be aware that these graphs are not complete, that close reading is still necessary – not only when working with digital tools – and that the past reality was more complicated than people might think.

Historians are not the only ones working on the Second World War. Outside of traditional academia, museums (Musée national de la Résistance), memorial associations (MemoShoah) or documentation centres (Centre de documentation et d’animations interkulturelles) use the subject to bridge a gap between the past and the present. The war can be linked to present events, such as the refugee crisis, or embedded in a larger context and related to questions of human rights and civil society. Accounts of witnesses are used as a means of evoking empathy, creating links between generations and reflect on the past and personal experiences. Even videogames can be analysed and discussed as a possible tool with educational value, as shown by Heiko Brendel (Universität Potsdam), though they must also be critically examined, in terms, for instance, of commercialization, hidden messages, representation of the past, and their content.

The research on WWII certainly faces numerous challenges, but the ForumZ offered many interesting insights and perspectives on the war. The purpose of historians is not to provide inalterable truths, to respond to ‘hidden agendas’ or to give people a good or bad conscience about their own or their families’ past. The work of historians consists of critically engaging with narratives, events and categorisations. The war and the occupation have a pre-history, as well as an aftermath. Decisions and behaviours of people during the war cannot be fully understood without taking the bigger picture and extended periods into account. The world cannot be divided between the ‘good guys’ and the ‘bad people’. Even if taboos, inaccessible or missing sources and persistent myths might slow down research, historians need to continue studying the past. This also entails that they critically reflect on their own approaches. It is only by doing critical research that at least parts of the long shadow of the Second World War can be illuminated.