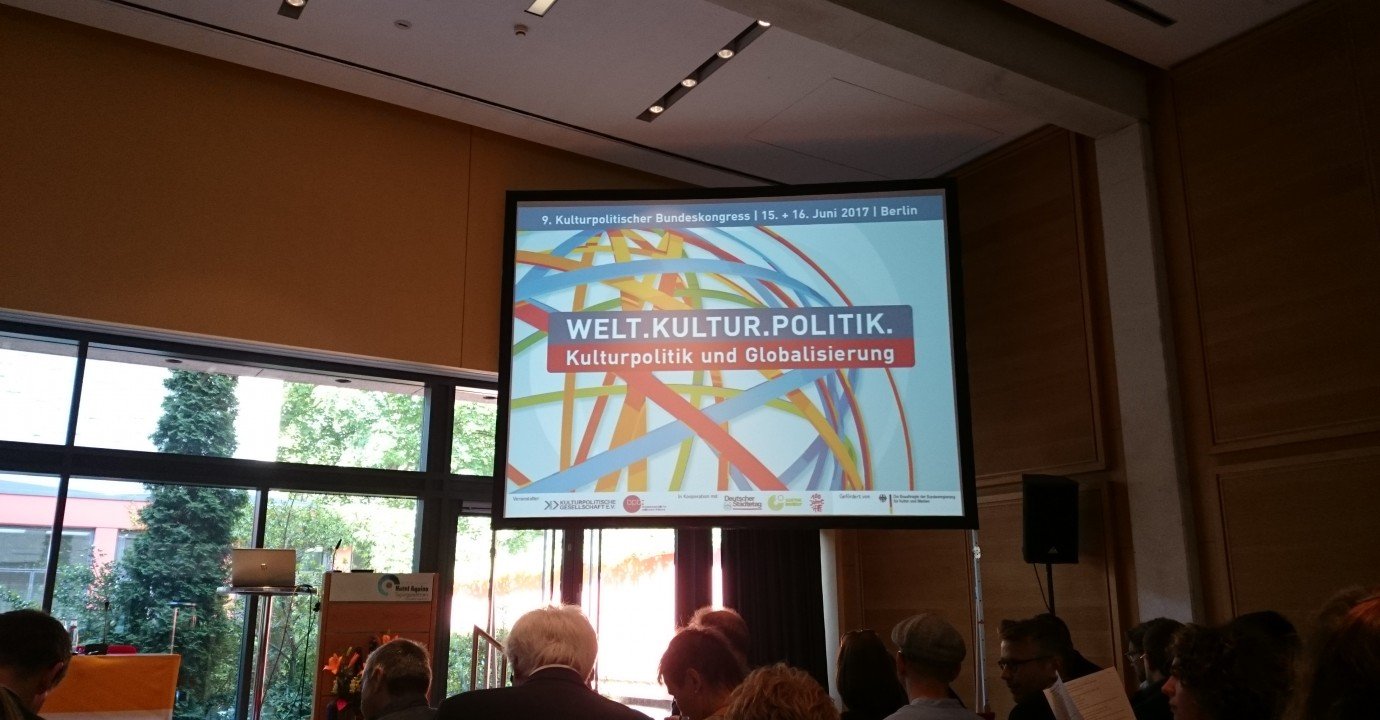 The following blogpost is a personal report on the ninth Federal Congress on Cultural Policy, which took place in Berlin on 15th and 16th of June.

Berlin is an example of what I would call a patchwork city. There is no unique and defining style, but a mixture of many influences, due to the town’s past: from baroque facades over concrete Cold War-buildings to contemporary architecture. Once a symbol of a divided world, it is now the capital of a reunited country where numerous political bodies, cultural institutions and media have settled down. It was in this multifaceted city that the ninth Federal Congress on Cultural Policy (9. kulturpolitischer Bundeskongress) took place under the header “Welt.Kultur.Politik. Kulturpolitik und Globalisierung”. This congress was organised by the kulturpolitische Gesellschaft e.V. (Kupoge), an association founded in 1976 and based in Bonn.

The Bundeskongress was not a purely academic event: the nearly 400 people who met in Berlin were a heterogeneous group of academics, politicians and cultural actors. Many current issues were put on the table and the guest speakers presented their views on them. Already the opening speeches by Oliver Scheytt, President of the Kupoge, and Thomas Krüger, President of the Bundeszentrale für politische Bildung (bpb), included a critique of neo-liberalism and underlined the issues of nationalism. Except for one forum with PhD students discussing their work, the Bundeskongress was not a place where the newest results in the field of cultural policy studies were presented. This is not necessarily a disadvantage, as one learns what cultural policy can do in practice and why it is important. For me, it provided a possibility to look at cultural policy through a different lens than the one of an academic ‘external’ viewpoint. However, the congress took place in a mostly German context: the core aspects of many discussions could not be grasped without some knowledge of German history and recent debates in Germany, such as the controversial and much criticized idea of Leitkultur (guiding culture) launched by Thomas de Maizière, German Minister for Home Affairs, defining what should be part of German culture.

Hence, the panel discussions were revealing of the discourses that predominate in our present times. It would be impossible to summarize every single discussion, controversy and aspect, but I will limit myself to the most striking ones (at least for me). As derived from the main title of the 2017 edition, the congress was dedicated to international cultural policy relations, but also its place in the context of globalisation. Several times, the close relation between “Weltaußenpolitik” and “Weltinnenpolitik”1Though these are quite specific German notions that are difficult to translate, because of the connotations they carry and as a consequence of the German language able to construct compounds, “Weltaußenpolitik” does not simply mean general foreign affairs policy, but rather includes the idea of (foreign affairs) policy in a global context. “Weltinnenpolitik” would refer to an internal policy considering the global situation, or informed by the international context. was underlined, both being “two sides of the same coin” as Ronald Grätz (Institut für Auslandsbeziehungen, ifa) said. Indeed, the international situation has also an impact on what happens in a country, global issues do not stop at national borders. The demographic change in a country affects the work of cultural actors and influences the strategies they put in place. In his keynote lecture, Harald Welzer, social psychologist and Director of the foundation FUTURZWEI, underlined the importance of cultural policy for creating, as he called it, “analogue spaces”, in opposition to digital spaces (social media). In another panel on new challenges for cultural mediators, the discussion turned to the question of how representative cultural institutions really are of the social diversity in Germany, an issue raised by Nana Adusei-Poku, researcher at the Willem de Kooning Academy. When the missions of the Goethe-Institute and the kind of culture it spreads in the different countries were discussed, Johannes Ebert, Secretary General of the Goethe-Institute, explained that it does not act according to a “canon”, but rather in line with a “strategy” or “method”: their collaborators in a country try to find out what could ‘fit’ in a specific context. Ronald Grätz, when asked whether he is responsible for mediating an image of Germany (“Deutschlandbild”), disagreed with the choice of term and criticized the idea of nation branding. He added that the ifa would show “art from Germany” and not “German art”. The idea of a new form of cultural diplomacy, based on exchange and cooperation, instead of simple showcasing, was defended by many participants who spoke on this subject.

When a congress picks up current political and social debates, it is nearly inevitable that at some point or another, the subject of digitalisation turns up. Unfortunately, the issue appeared like a spectre, somehow present but not clearly defined. Its practical impact on culture and media was rarely discussed: for instance, Susanne Spröer, journalist and managing director of Deutsche Welle’s Culture Online, only briefly mentioned this specific issue in the context of strategies to attract readers’ attention. Harald Welzer also presented his analysis of digitalisation, although from a pessimistic viewpoint and at a theoretical level. According to him, it would lead to the “atomisation of society” and depicted it as a “Vereinzelungstechnologie”, meaning “technology of individualisation”, in the sense of separation or isolation of a person from fellow human beings. For Verena Metze-Mangold, President of the German UNESCO-Commission, it is clear that digitalisation plays a major role in the transformation of our current society. She also raised the issue of algorithms and the opaque way search engines such as Google work. Converging on the opinion of Welzer, she described an opposition between the public sphere (Habermas) and a “growing foam heap of bubbles separated against each other” (“wachsendes Schaumgebirge von gegeneinander abgekoppelten Bläschen”).

During the event, many calls were made for more self-criticism and self-reflection. The keynote lecture by Indian writer Pankaj Mishra provided a lot of input in this context, criticizing the dominating narrative of Anglo-American ideologies. We should step away from them, and ask ourselves what the ‘West’ is. For Mishra, the experience of “late-comers” to history has become the most important one. Following the thoughts of Gayatri Spivak and María do Mar Castro Varela, Thomas Krüger pleaded in favour of a reflected learning and the questioning of the own privileges. In a similar vein, Welzer spoke of unlearning schemes and our own bigotry.

The subject of globalisation also implies the question of borders/limits and identity, and these were recurrent themes in the numerous interventions. Wolfgang Merkel, professor for political science at the Humboldt-University, presented some thoughts on borders, right-wing populism and, in his opinion, difference between the “cosmopolitists” and “communitarists”. Whereas the former stress the opportunities of globalisation and belong to the higher strata of society (“frequent flyers” as Craig Calhoun once coined it), the latter, in contrast, see a danger in globalisation and express the need for clearly delimited social and political spaces. Welzer criticised Merkel for his vague definition of what the “Unterschichten” are, supposedly belonging to the communitarists. As Welzer added in a sarcastic tone (though with a legitimate critique), it was only assumed that “they are not here in this room”.

Germany’s imperial and colonial past

The topics discussed at the Bundeskongress could not be fully covered in two days, because of their complexity, but also due to the controversies they carry. Recently, there have been many debates on whether a cross should be added to the dome of the Berliner Stadtschloss (City Palace in Berlin) currently being reconstructed. The building originally dates back to the 15th century, was later the residence of Prussian kings and, after the unification in 1871, of the German Emperors. Heavily damaged during the Second World War, it was completely demolished in 1950. At the Bundeskongress, it struck me how problematic the relation to the imperial and colonial past of Germany still is in this country. Several speakers pointed at the fact that a Prussian symbol is reconstructed, for them much more problematic than adding a cross to the building. One person reminded that Germany was only unified after two wars of aggression. A listener in the public voiced her discontent with the fact that in Hamburg, there are debates on renovating the statue of Bismarck, instead of “blowing it up”, and added that there are still many streets named after mass murderers and warmongers.

I cannot say much about the way the German imperial/colonial past is represented in German history books and the public spaces, but these discussions struck me. They were not at the core of the event, but still flared up from time to time. The more I think about it, the more I have indeed the subjective impression that the colonial past or the Prussian heritage are not really dealt with in a critical way, at least not in public debates. Maybe this period is already too far in the past, overshadowed by what came afterwards. But then again, is Germany really the only country having issues with some periods of its history, especially the colonial one?

After the end of the first day, I used my free time to walk through the streets of Berlin and went to see the Reichstag building, itself a product of the German Empire. Next to it, the river Spree takes a turn northwards, flanked by the Paul Löbe building to the west and the Marie-Elisabeth-Lüders edifice to the east. At this exact place, the Berlin Wall ran alongside the riverbank and divided the city for 28 years. While strolling around, I stumbled upon an advertisement of a multimedia-show, projected every evening until the 3rd of October. My curiosity got the better of me, and so I decided to watch it. Mainly a documentary with some light effects, it told the history of parliamentarianism in Germany on three interconnected levels: through the histories of the Reichstag building, of Berlin and of Germany. Of about thirty minutes in total, not much was dedicated to the period of the First World War, or the years ranging from 1933 until 1945 (“Germany’s darkest period”). The Second World War itself, “Hitler’s megalomania”, was explained in just two sentences. This superficial master narrative, where the Nazi past is too painful to talk about its details but still has to be mentioned somehow, contrasts with the colonial past, which is not even alluded to.

The show presented parliamentary democracy as a success story of German history. But then again, can this history really be understood if the ‘dark’ periods are simply left in the dark? My short stay in Berlin was also a small history lesson, or rather that of history narratives and the way the past is dealt with. And this is, after all, also part of cultural policy.

This blogpost was also published on the page of the C2DH.

Watch our short video and take a look at the infographic to learn about the best #storytelling tips & practices. Use them to create your own #CulturalHeritage #DigitalStories and participate in our creative contest➡️ https://bit.ly/3eYlg5M
#DigiStoryFest

On May 17th (at 17h CET), my students will discuss online some issues in public history. Feel free to join us https://www.eventbrite.com/e/public-history-opportunities-and-challenges-tickets-152469754139?fbclid=IwAR1u6bLj_c2kE_72CJWzXHQTwxV5GCotzAjP0Z-X49rmPB5H9J4asfQSqQg #publichistory

We’re delighted to share the preliminary programme of the 4th Public History Summer School. Find out what public historians do all over the world by registering here: https://forms.gle/S7QX4YdTK9hnoqG48
The whole programme: https://publichistorysummerschool.wordpress.com/2021-2/

Any cookies that may not be particularly necessary for the website to function and is used specifically to collect user personal data via analytics, ads, other embedded contents are termed as non-necessary cookies. It is mandatory to procure user consent prior to running these cookies on your website.