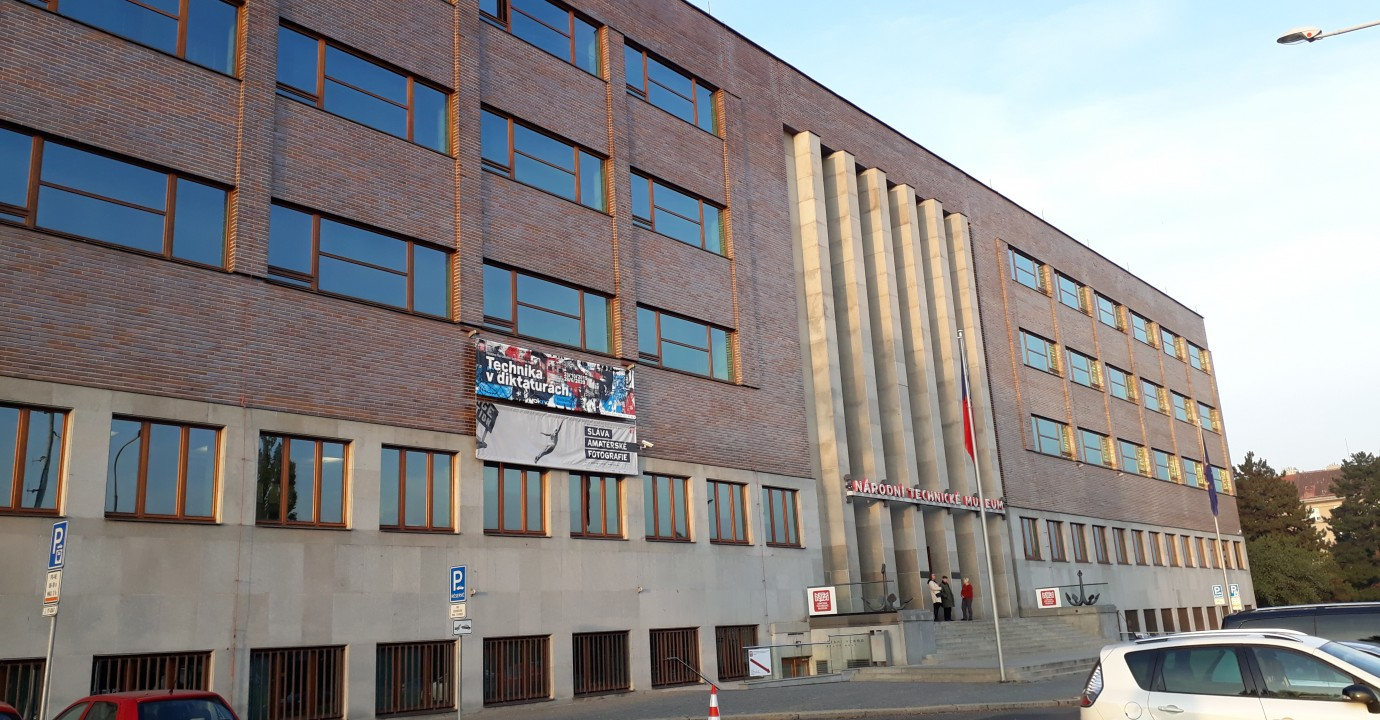 Crossing the Imaginary Curtain: My Experiences in Prague

In October, I traveled to Prague for a workshop on the history of science and the Second World War. For the second time during my PhD, it was an opportunity to cross the imaginary iron curtain. The experiences during those days were undoubtedly insightful.

While writing the current blog post, I had to think back to a personal experience during my stay in Berlin some months ago. I did a stroll through the Tiergarten and arrived, rather coincidentally, at the Soviet monument. I could not make sense of its Cyrillic inscriptions. It struck me then how limited my possibilities are, and that the shadow of the Iron Curtain is still, somehow, reaching into the present. How much do Western and Eastern researchers communicate with each other? How much research remains ignored because of language barriers (and, possibly, prejudices)?

History of science and the Second World War

From 23 to 25 October 2019, I had the pleasure to assist at the workshop Science, occupation, war: 1939-1945 in Prague, organized by the Institute of Contemporary History of the Czech Academy of Sciences and taking place in the National Technical Museum. I had the opportunity to present a paper on the State Museum in Luxembourg during the occupation, renamed Landesmuseum by the German administration, which figures as a case study in my ongoing research for my dissertation.

The workshop was a fruitful experience and I extend my thanks to the organizers, who have invested great efforts in the hospitality of the guests. I had inspiring exchanges with researchers and I learnt a bit more about Eastern Europe in general, and the Czech Republic in particular. The workshop has certainly illustrated that exchange is indispensable; it elicits collaborations, debates, and progress of knowledge. Yet, it appears that communication is still insufficient between Eastern and Western European researchers, partly (or mostly) because of language barriers.1In fact, for a very long time in Luxembourg, cultural policy was subsumed under the expression “arts et sciences”, thus encompassing research, too. Yet, research infrastructures were not well developed until late into the 20th century. Morgan Meyer has studied the development of science infrastructures in his article Creativity and its contexts: the emergence, institutionalisation and professionalisation of science and culture in Luxembourg (2009).

It is not my aim to summarize all the papers. What they had in common was the general framework of history of science, a field with which I have barely engaged during my research. However, this was not problematic in the least. The topics covered by the workshop were very broad. Depending on the papers, the focus lay on private companies, administrations, individual researchers, research institutions, structures or networks. Of course, there are no clear boundaries and the papers have illustrated the interconnection between these elements. Due to the context of the period on which the workshop focused, the presentations were quite transnational. The Nazi expansion in Europe, the occupation and annexation of countries and regions eliminated or redrew national boundaries. Within this context, and in relation with Nazi war plans and racial ideology, researchers, companies and institutions acted transnationally within a very specific framework. In other cases, people were deported and forcibly moved from one place in Europe to another.

In the final discussion of the workshop, the participants addressed a series of commonalities of the presentations, which is not easy due to the large range of topics. Yet, several aspects could be identified, for instance that the war cannot be considered as a separate period. The presentations have shown very clearly the continuities and breaks, before and after the war. When I prepared my presentation for the workshop, this aspect was very much on my mind. I tried to highlight this in my paper with the Westforschung, for instance. Before the invasion of Luxembourg, Luxembourgian historians were in touch and exchanged with Westforscher2Indeed, I was the only presenter from the Benelux countries; there were no researchers from France, too. The large majority of topics presented at the conference were related to Eastern European countries.; there are a few indications that Westforscher possibly influenced the plans of the permanent exhibition at the Landesmuseum during the occupation. In addition, embedding the years of the war in a larger temporality also begs the question of the continuities of the elites in the post-war period.

The Landesmuseum as a scientific and cultural institution

Admittedly, prior to my journey to Prague, I was not aware that the workshop was embedded in the field of history of science. I have the impression that history of science is not well established in Luxembourg, and it has struck me, from the range of topics presented at the workshop, how much could be researched in this field in the context of the Grand Duchy. Of course, I framed my abstract for the call by stressing the Landesmuseum’s role as both a cultural and a scientific institution; but I did not consciously do it from the perspective of history of science. I considered the workshop an excellent opportunity to present my case study. Though I examine it in my thesis mainly from the perspective of a history of cultural policy3This has been analyzed, for instance, by Bernard Thomas in his study Le Luxembourg dans la ligne de mire de la Westforschung: 1931 – 1940 (2011)., the State Museum/Landesmuseum was also a place where research was carried out. I have been focusing on the historical and archaeological section of the museum and have analyzed the activities during the war: acquisitions, excavations, exhibitions. The first aspect has been the thorniest in the sparse literature on the Landesmuseum. For me, the institution is an excellent case mixing continuities and changes: the custodians remained employed, but the museum’s acquisitions increased considerably thanks to the support of the German administration, for instance.

The discussions and presentations allowed me to take a look at my own research from a different perspective. I have been confronted or have been confronting myself with several issues more or less absent until then: the question of publications in the immediate post-war period and whether they are based on research carried out during the occupation; the question of anthropology and racial research in Luxembourg (which I was asked during the discussion of my presentation). Indeed, the sources do not reveal much on this subject, and to my current knowledge there were no planned exhibitions related to racial research, for instance. Yet, with the input of the workshop and the questions I was asked, I re-examined some sources upon my return to Luxembourg, especially the war-time reports and documents related to the natural history section of the museum.

My stay in Prague, however, did not only encompass my participation in the workshop. Of course, I used the leisure time to visit the city and some of its museums. I was interested in how the Communist era is perceived or represented in the Czech Republic. I visited the Museum of Communism (MOC), which constituted a rather mitigated experience. As I took no notes, I am going to stick to personal and general impressions. While the organizers certainly put efforts in the presentation, the narratives and the topics lacked in my opinion complexity and depth. Individual Czech ‘heroes’ were highlighted, but the oppression was mostly embodied by collective actors receiving orders from Moscow (or through the leaders of the Communist era). The everyday life of the citizens was not conceded much space to. The small room on the education system implicitly criticized that Russian was a compulsory language, which is a judgement from today’s perspective. As far as I can recall, when ‘heroes’ were highlighted, they were only, or mostly, men. In the section on research and science of the Soviet Union, the achievement of sending the first man into space was solely explained with the fact that foreign researchers were coerced to collaborate. That the US were also relying on foreign researchers was not mentioned.

A very different picture of the Communist era was provided by the temporary exhibition in the Czech Museum of Music on export and import of music in Czechoslovakia before 1989. Indeed, this exhibition showed the complexity of the cultural life, the exchanges beyond the iron curtain, the repression and censorship, but also the loopholes. Czech cover versions were produced of Western pop and rock songs, such as Karel Gott’s version of Boney M’s Rivers of Babylon (1978). While Western music was illegally imported to Czechoslovakia, Czech music production was exported to Western countries. Music is only a small example of culture at the time and of how people coped with the repression. This was something I missed in the MOC, except for the small temporary exhibition devised by students, focusing on the remembrance of the Communist past today. The interviews with witnesses certainly added a personal note missing in the narrative of the permanent exhibition.

During my stay in Prague, I was a tourist as much as I was a historian. I did some sightseeing, enjoyed visiting the castle (a UNESCO heritage site) and the museums, bought souvenirs, and took pictures of buildings and places I liked. Yet, how much did I ignore of the history (or histories) of places I visited? When I walked past the Prague Metronome in the Letna Park for the first time, I noticed a graffiti in its vicinity; “Save Stalin Plaza,” it demanded in English. Only later did I learn that this was the former site of a Stalin monument erected in the 1950s and destroyed in 1962 in the context of destalinization. The monument was gone, but Stalin’s name carried on. How many places did I cross, unaware of memories linked to them? Yet, in this interconnectedness between my roles as tourist and as historian, it was not only the (unawareness) of memories with which I was confronted. It was the commodification of history, too. Despite being a place of education, conservation and memory, the museum is also a tourist attraction. Otherwise, why would the MOC’s shop, despite its anti-Soviet rhetoric, sell small Stalin bust candles?

My stay in Prague has shown me, once again, how much there is to be learnt and exchanged; how much excellent research is done in other countries of which I am not aware and to which I cannot access. The confrontation with new perspectives was certainly insightful, even beyond my participation in the workshop.